The world’s most respected marine biologists will bring you the latest information on the greatest underwater creatures we know – sharks. Your favorite celebrities including Robert Irwin, William Shatner, Tiffany Haddish, Brad Paisley, the cast of Jackass, and many more will take you along on their underwater shark infested adventures starting this Sunday and running through July 18!

Watch out for episodes on the newly discovered great white shark feeding behavior, the battle between great whites and tiger head sharks, and answers to the ultimate questions like: Who reigns supreme – crocs or great whites?

And while Shark Week is all about what’s in the water, if you’re anywhere along the East Coast through the month of July take a look up at the sky and you may see the first-ever 128 foot-long Shark Week Blimp! The blimp took off from Nashville on Friday, June 25 and will be traveling down the East Coast 250 miles a day until July 20.

This hilarious Shark Week video will get you pumped! Shark Week is a summer tradition and airs every year on Discovery Channel for eight days.

Here’s the SHARK WEEK schedule, with show details below: 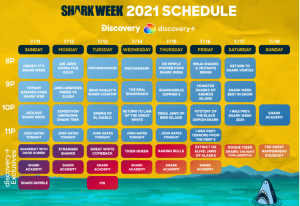 Sunday, July 11
8 p.m. — Crikey! It’s Shark Week
Robert Irwin comes face to face with a great white shark for the ﬁrst time ever, with shark conservationists Paul de Gelder and Madison Stewart. Robert will get as close as possible to these incredible creatures to determine which predator reigns supreme – crocs or great whites?

9 p.m. — Tiffany Haddish Does Shark Week
Tiffany Haddish hosts Shark Week! While her fantasy was to uncover the secrets of shark sex sailing on the fanciest yachts surrounded by friendly sea creatures and pampered by a handsome merman, she’s joined by Dr. Toby Daly-Engel, Dr. Craig O’Connell, and Alannah Vellacott for a very sharky wake-up call.

10 p.m. — Jackass Shark Week Special
Johnny Knoxville sends Steve-O, Chris Pontius, and new Jackass cast members on a Shark Week mission for the ages. They’ll dial up a series of shark stunts that test their bravery and threshold of pain as they put common shark myths to the test with the help of Dr. Craig O’Connell.

Streaming exclusively on discovery+ — Sharkbait with David Dobrik
Internet sensation David Dobrik and his friends are on the craziest adventure yet… Diving with SHARKS! When faced with bad weather and sharks larger than they expected, these 20-somethings quickly find themselves asking, “Why did we go on Shark Week?”

9 p.m. — Jaws Awakens: Phred vs. Slash
Rumor has it that two of the largest sharks in existence have been recently roaming New Zealand waters, but nobody knows which one is the largest. Brandon McMillan and Dickie Chivell are heading out to see which one takes the cake – Phred or Slash?

10 p.m. — Expedition Unknown: Shark Trek
Josh Gates links up with his childhood hero, William Shatner, to boldly go where Shark Week has never gone before. The mission: enter shark-infested waters to understand the nature of fear and come face to face with an apex predator. This is Shark Trek.

Exclusively on discovery+ — Stranger Sharks
Mark Rober and Noah Schnapp from Stranger Things are teaming up for the ultimate Shark Week adventure…exploring abandoned undersea ruins and man-made artificial reefs searching for the strangest sharks in the ocean.

Tuesday, July 13
8 p.m. — MotherSharker
It’s a great mystery where tiger sharks give birth. One team of scientists and shark experts including Dr. James Sulikowski, Dr. Toby Daly-Engel, Dr. Neil Hammerschlag, and Jamin Martinelli deploy an arsenal of new technology to find out, but they need to meet some of the Bahamas’ biggest tiger shark mothers face-to-face for it to work.

10 p.m. — The Spawn of El Diablo
In 2012, Michelle Jewell documented one of the largest great white mating scars ever recorded. Recently similar marks have appeared, leading her to believe this is a possible mating ground and that mega-shark El Diablo has returned to South Africa.

Streaming exclusively on discovery+ — Great White Comeback
In 2017 one of the strangest ocean mysteries occurred in South Africa when an entire great white population disappeared overnight. Alison Towner and her team, Enrico Gennari and Andy Casagrande head out on an epic investigation to find the missing great whites of Seal Island.

Wednesday, July 14
8 p.m. — MechaShark
Researchers Kina Scollay, Mark Erdmann, and Al Baxter build a submersible mechanical shark to track down New Zealand’s monster great whites and pilot it deep into what they believe could be a mating ground – the Holy Grail of shark science.

9 p.m. — The Real Sharknado
We have all seen the movies, sharks jumping into boats, circling in tornados, and risking their lives to attack humans. Could these shark feasts happen? Ian Ziering and Tara Reid pick up their chainsaws once again – this time with the help of Dr. Tristan Guttridge to see if a real Sharknado could happen.

10 p.m. — Return to Lair of the Great White
Dr. Craig O’Connell and Marc Payne return to where they unexpectedly filmed a juvenile great white during a past mission. Believing there’s a nursery nearby, they follow the trail to a discovery that could change everything we know about great whites.

Thursday, July 15
8 p.m. — Dr. Pimple Popper Pops Shark Week
Dr. Sandra Lee has entertained millions with her extreme pimple popping videos. Now she heads to Turks and Caicos with Dr. Austin Gallagher to explore the world of shark skin and how she can apply the science they gather to help human skin issues.

9 p.m. — Sharkadelic Summer 2
Sharkadelic is back to find out if this summer will be the sharkiest on record. Snoop Dogg breaks down the craziest encounters, the wildest and most unpredictable reactions to discover if America is once again ground zero for the shark superstorm.

10 p.m. — Mega Jaws of Bird Island
South African great whites are on the brink of extinction, but experts believe there is at least one breeder shark left in the water surrounding Bird Island. Alison Towner, Chris Fallows, Dickie Chivell and Enrico Gennari will search and tag the last female great white mature enough to carry on the species.

Streaming exclusively on discovery+ — Raging Bulls
Bull sharks are one of Australia’s “Big 3” deadly shark species, and recently there’s been a shift in their behavior concerning the human population. Paul De Gelder joins Johan Gustafson to uncover why these sharks are becoming more aggressive hunters.

10 p.m. — Mystery of The Black Demon Shark
In Mexico, legends swirl around El Demonio Negro, a 50-foot shark that has terrorized fisherman and tourists alike for generations. Is this an undiscovered predator? Forrest Galante hunts for answers in the most rugged and remote parts of the Baja Peninsula.

Streaming exclusively on discovery+ — Extinct or Alive: Jaws Of Alaska
International wildlife biologist Forrest Galante travels the world in search of rare and elusive wildlife, including those lost to science, and mysterious cold-water sharks.

Saturday, July 17
8 p.m. — Return to Shark Vortex
As the Shark Vortex retreats in the fall, sharks battle it out for dominance in New England’s icy waters. Experts Dr. Greg Skomal and Joe and Lauren Romeiro brave rough oceans and fierce predators to capture new footage and insight of the phantom shark and reveal which shark reigns supreme.

9 p.m. — Shark Week Best in Show
Discover everything that has happened in the world of sharks this year including unbelievable viral videos, big news stories, and the latest in cutting-edge shark science.

Streaming exclusively on discovery+ — Rogue Tiger Shark: The Hunt for Lagertha
A monster lurks in the crystal blue waters off the coast of Costa Rica named Lagertha. In this epic adventure, Dr. Craig O’Connell, Vicky Vasquez, and Andy Casagrande team up to discover why the tiger sharks in this area are unexpectedly more aggressive.

Sunday, July 11
10 p.m. Streaming on discovery+ — Shark Academy
Shark Academy follows eight men and women on an intense six-week crash course to secure a coveted crew spot on shark scientist Dr. Riley Elliott’s next great shark diving expedition. It’s an opportunity of a lifetime for these shark enthusiasts with non-traditional backgrounds to leap ahead in the competitive world of shark research, embarking on the adventure of a lifetime in hopes of making their dreams a reality.

Streaming exclusively on discovery+ — The Great Hammerhead Stakeout
Dr. Tristan Guttridge and James Glancy travel to Andros Island to investigate reports of an exclusive population of giant hammerheads. To get answers, they attempt one of the longest shark dives EVER – upwards of 10 hours – using an underwater habitat.